If you don’t know about Mordechai you should. He was a true hero to his niece (Actually Cousin) Queen Esther of Persia in Biblical Times and to the survival or the Jewish People. We have fantastic Purim Holiday Observation Costume Ideas like this Mordechai Jewish Hero Costume. You will also find fun, fabulous Purim Festival Characters and Costume Disguise Ideas galore.

Purim, or the Feast of Lots, is a joyous holiday that recounts the saving of the Jews from a threatened massacre. The holiday is traditionally celebrated with a Carnivale and Skits, and with the giving of gifts to friends and the poor.

A major tradition is the Purim Shpiel, The Purim Play, during which fun is poked at community leaders and members.  Often referred to as Jewish carnivale, this is a festival in which people dress up either in costumes of characters from the bible or just jovial items that would not normally be worn everyday. 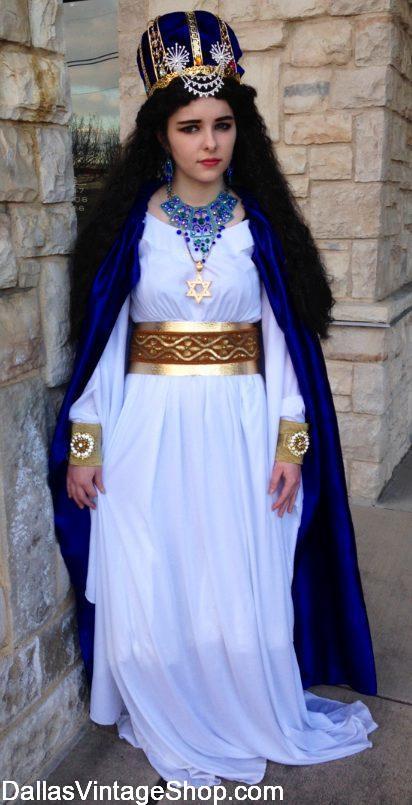 Get this Queen Esther Costume for Purim Theatrical Productions, Plays & Skits. We have all the Quality Historical Costumes & Accessories for other Jewish Holidays, Feasts, Festivals & Other Celebrations and Events. We also have fun or wild and crazy disguise Costumes to help you celebrate. Any Decade, Any Century or Any Character Imaginable. Get our Highest Quality or find something within your budget.

The overriding theme of Purim is the saving of the Jews from a mortal threat. The holiday of Purim has become one of the best-loved holidays of the Jewish year. The reasons for this are easy to see. It is a joyous holiday on which everyone relaxes and has fun. The story of Purim holds out the hope that no matter how bad the circumstances, things will turn out well in the end. Most Carnivals have an overarching theme specific for the year in order for people who want to dress up and have fun to really let go.

We have Purim Festival Attire. You may need a Wicked Haman Purim Play Costume or other Persian Characters Attire. We have all the Villain and Hero Costumes to help you create the simple skits or theatrical production. And when it comes to disguise costumes there is no place on earth with more Ideas than us. Get complete costumes or just the pieces you need. Bring your friends and have a blast shopping for your favorite costume characters.

A Purim spiel is actually a play of the events found in the Bible. Featuring the main characters, such as King Ahasuerus, Mordecai, Esther, and the wicked Haman, the Purim spiel provides an opportunity for crowds to cheer the heroes and boo the villains. Many modern synagogue Purim celebrations allow children to attend the play and carnival dressed in costumes depicting these main characters.

Often, a school will hold a costume contest and organize a parade of all the costumed children. While it is traditional to dress as characters from the story, many Jewish families celebrate Purim as an alternative to Halloween, with children dressing in non-traditional costumes and masks. There is no “right” or “wrong” costume for Purim.

We have quality Biblical Attire for Passion Plays and for Jewish Purim Holiday Celebrations. We have Pharisee Attire, Hebrew High Priest Costumes, Sadducee Costumes, Disciple Outfits, Roman Soldier Armor and so much more. Get what you need at Dallas Vintage Shop including wigs, beards and makeup.

Many synagogues hold special family or children’s services on Purim, or make a point of including families so that the children will be able to not only attend in costume, but shake their noisemakers and contribute to the merriment through making lots of noise.

Why Shop For DECADES CLOTHING & COSTUMES at Dallas Vintage Shop?

Costume Suggestions… Guide for ‘How to shop at Dallas Vintage Shop

This entry is filed under Purim Celebrations. You can follow any responses to this entry through the RSS 2.0 feed. Both comments and pings are currently closed.