Joe Exotic said he wore his pistols for people use, not for big cat use. This Tiger King Joe Exotic Outfit is perfect for Pub Crawls or Trailer Trash Parties. We have unlimited Trailer Trash Characters Outfits as well as all the Characters from the Tiger King, the Netflix Mini-Series.

What is your favorite Joe Exotic Outfit from the Netflix, Mini-Series TV Show? We have the Exotic Shirts that Joe Exotic liked to wear, Joe Exotic Wigs and Mustache, Gunbelts & Pistols(used for people) and even bone choker necklace or cross necklace he wore.

Nobody has the wild & crazy inventory required to keep up with TV Show Characters like Joe Exotic, Carole Baskin and all the Netflix, Tiger King Mini-Series Characters. What is your favorite TV Show Character? We have an outfit for that. 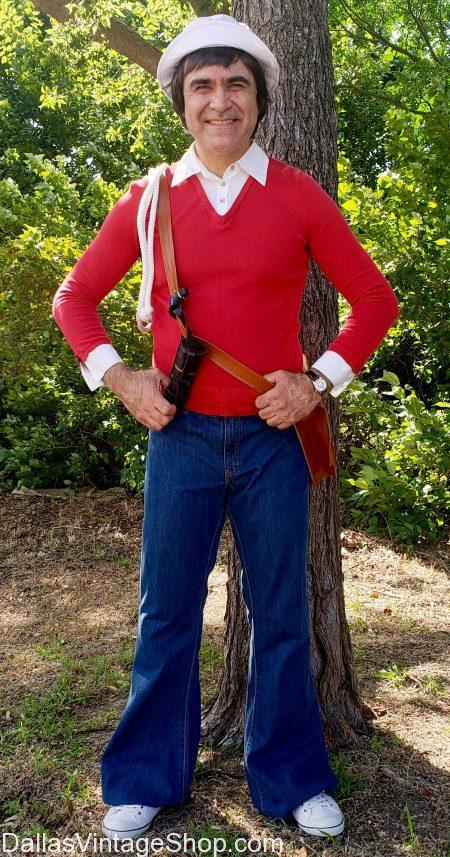 TV Sitcom Characters, like this Bob Denver, Gilligan, from Gilligan’s Island Costume is just one of thousands of Classic 60’s & 70’s TV Sitcom Characters we keep in stock at Dallas Vintage Shop. We have the largest collection of Vintage Hollywood TV & Movie Character Costumes in Dallas, DFW and anywhere.

Get Costumes for TV Sitcom Characters that will crack you up and then put a huge smile to your faces of everyone at your Old Hollywood theme party. Good ole Bob Denver. Gilligan is just one of our Classic TV Show Characters. Get all the other characters from Gilligan’s Island or any other 60’s TV Shows. You will find all of your Favorite Classic Iconic Characters Costumes here. Any Decade or Any TV Show or Classic Hollywood TV Movie Characters Costumes are all here waiting for you at Dallas Vintage Shop.
You won’t believe all the Characters from all the TV Sitcoms we have packed into our Full Line Costume Shop & Vintage Clothing Store. What is your favorite Old School TV Show? We have the Costumes for all of those Characters. Remember, if there is a Costume you don’t see on our website, don’t worry. We only have room for several thousand of our favorites. Our encyclopedic collection of Classic TV Character Costumes is stupendously ridiculous. There are thousands of Classic 60’s & 70’s TV Sitcom Characters we keep in stock that you won’t see on the website, but rest assured, we have them. Get Complete TV Character Outfits or just the pieces you need. Get our Supreme Quality Dream Costumes or  or create your own Economy or Median Priced Version of your own favorite Famous TV Celebrity or Movie Character.

Look at this ‘I Love Lucy’ Costume. This Lucille Ball 1950’s Costume is just one example of the many Lucille Ball TV appearance outfits she wore. We have almost any Lucy Costumes you can imagine. So, what is your favorite Lucille Ball Outfit in from her TV Show Character? This ‘I Love Lucy’ (1951-1957) Costume is a 1950’s Classic. ‘Lucy Ricardo’ is one of the most loved Hollywood characters ever. We have high quality Lucy Wigs, Gloves, Belts, Jewelry and Shoes for this Lucy Costume. No matter what your favorite decade, TV show or Hollywood character, we can hook you up. We have the wigs & all the right accessories to help you put together the most amazing costume. Dallas Vintage Shop has the largest collection of ‘I Love Lucy” Characters and any other TV Show or Movie Characters in the Dallas Area. We are open all year.

Need 1960’s Fashionable Clothing or Theme Party Costumes? You can’t do any better than beloved Housewife, Laura Petrie, from ‘Dick Van Dyke Show.’ We have any TV, Movie, Historical or Theatrical Character Costumes for any Decade or Century. Get the entire outfit or just the ‘Wow’ Factor pieces you need. We have kids sizes all the way up to XL and Plus sizes, in stock now and we’re open all year round. 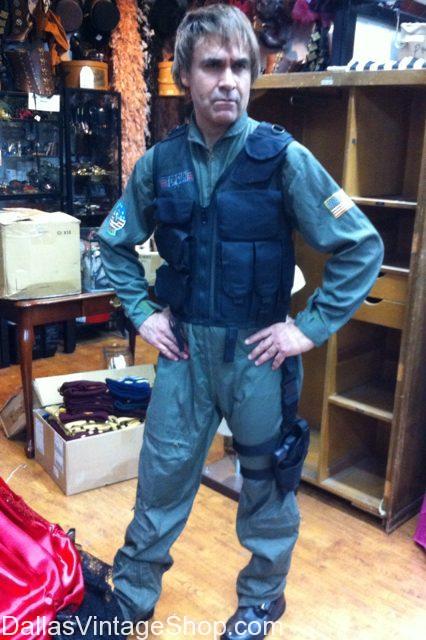 If you are looking for some unique 90’s Costume Ideas we have plenty in stock to choose from. Like 90’s Sci-Fi? What is your favorite TV Show or Movie Character from the 90’s? This Stargate SG-1 Uniform could work Col. Jack O’Neill or Dr. Daniel Jackson, Stargate Character Costumes.

Your choices for 90’s Costume Ideas are unlimited. Get Complete Outfits, Theatrical Wardrobes or just the Accessories you need. This Cool Stargate SG-1 Uniform Jumpsuits are perfect for Col. Jack O’Neill, Dr. Daniel Jackson or other Stargate Characters Costumes. We have every imaginable 90’s Sci-Fi Move or TV Show Character Costumes and any other 90’s TV Show or Movie Costumes. There are tons of other 90’s Costume Ideas. Check out our 90’s Costume Category for more great ideas.

Suggestions… Guide for ‘How to Shop at Dallas Vintage Shop? 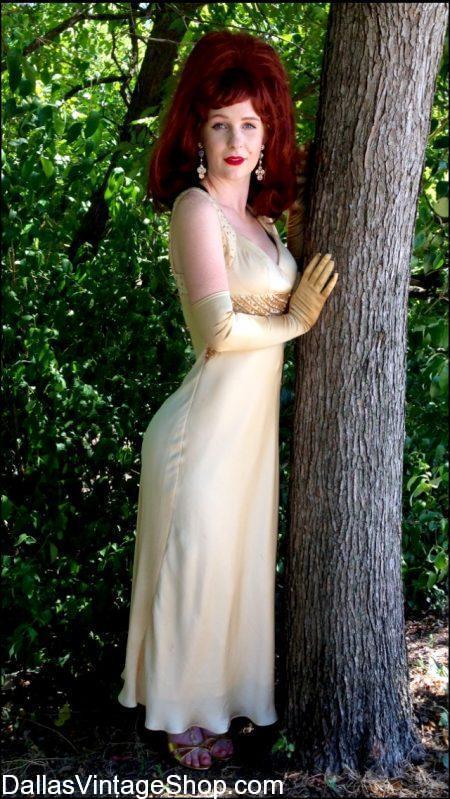 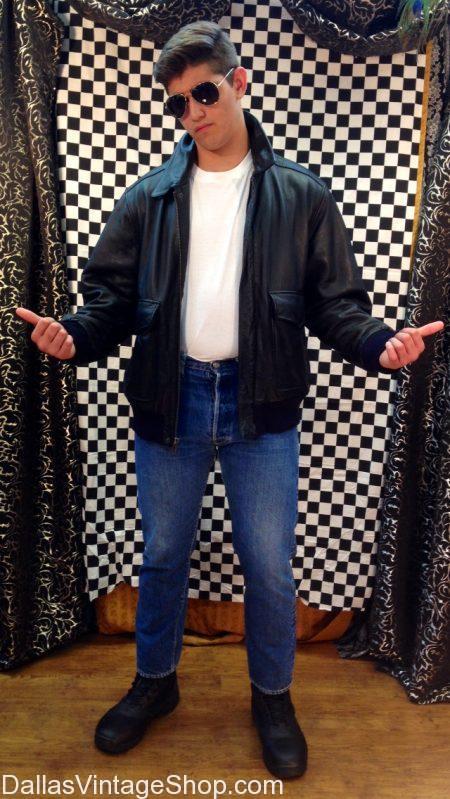 This Fonzie, Happy Days Costume is an example of the thousands of TV Show Favorite Character Costume Ideas we keep in stock. Happy days TV show aired from 1974 to 1984 and takes place from the mid 50s to the mid 60s. This is a classic look for the 50s and 60s and for Sock Hop costume ideas. Who do you want to be? 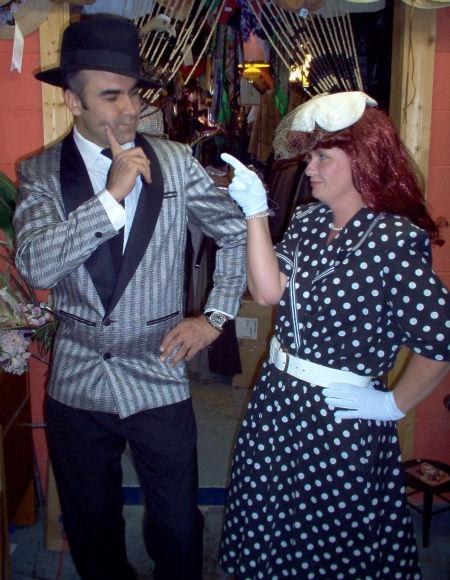 Ricky and Lucy Lucille Ball and Ricky Recardo are favorite classic costumes. Since its origin in 1951, the I Love Lucy Show has been a favorite. We have costumes, wigs, fedoras, dresses, suits, sport coats and more to help you pull together the outfit you want. See also: 50’s, Classic Costumes, Movie & TV Themes 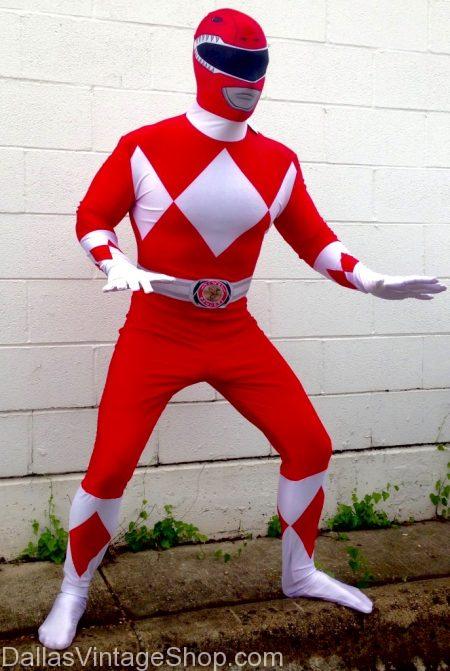 90’s Costumes for TV Shows like this Red Ranger, Power Ranger Costume would really be a fun costume to wear to a 90’s Theme Party. We have tons of other great 90’s Costume Ideas in stock.

Looking for Great 90’s Costumes? Show up in this Red Ranger, Power Ranger, Kid’s TV Show Costume and get all the attention. There are thousands of Great 90’s Costume Ideas we can provide. 90’s TV Shows, Kid’s TV Shows & a ridiculous number of 90’s Blockbuster Movies have so many Iconic Characters & Costume from the 90’s that are sensational. When it comes to 90’s Theme Parties, nobody on earth can beat Dallas Vintage Shop’s Quality, Quantity and Variety. Get Outfits and all the Accessories you need for any 90’s Costume.

Another Fun 90’s Costume Ideas is to outfit yourself or your group in 90’s Goth or 90’s Grunge Outfits. Dallas Vintage Shop is the Encyclopedia of Costumes and the 90’s are no exception.  There is unlimited 90’s Celebrities & 90’s Rock Star Outfits that will blow you away. Find 90’s Clothing & Fashions with all the 90’s Wigs & Accessories to compliment any 90’s Outfit.

And there are 100’s of OTHER COSTUME CATEGORIES for you to Browse in the RIGHT HAND COLUMN.