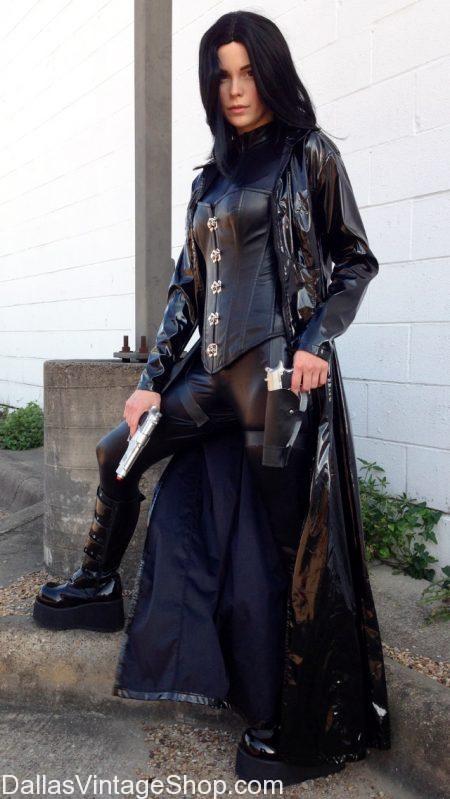 Who is your favorite Vampire. We have all the Top Vampire Characters Outfits Imaginable. This Selene Underworld Premium Vampire Costume has the detail you want. So do all of our other Vampire Character outfits. We also have any Sexy Action Characters, woman or man you can think of. Everything is sold piece by piece so you have unlimited options for assembling the Super High Quality Costume or Moderate or more Economically priced Vampire Costume. You determine the exceptional quality or more reasonably priced items that you decide to get. Get entire outfits or just the amazing pieces you need. 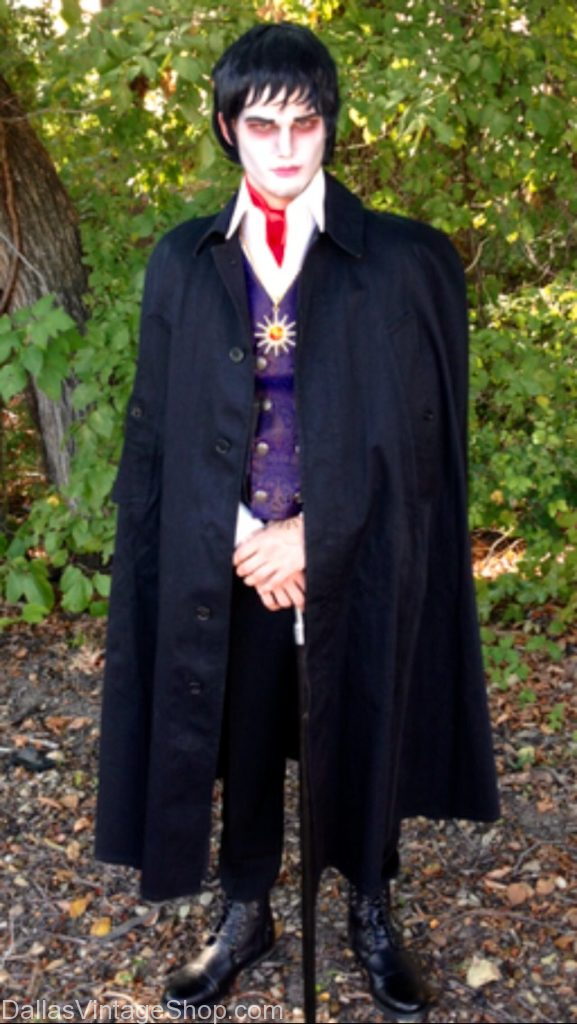 We have all the Best Vampire Costumes in TV & Movie History. This Dark Shadows, Barnabas Collins, Johnny Depp Costume is only one of hundreds of famous vampire outfits we keep in stock. We also have any Johnny Depp Movie Character Complete Getups. Get Vampire Costumes for Any Decade, Any Century & Any Movie Character. We have the largest & most thorough collection of Vampire Period Attire, Vampire Makeup & Vampire Accessories in the Dallas, DFW & North Texas Area. We are open all year to serve you. 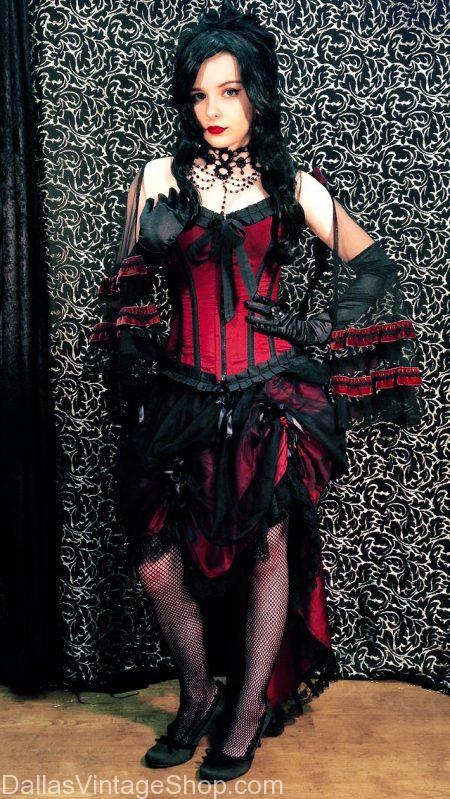 Do you prefer Victorian Goth Vampires? This is our Santanico Pandemonium Vampire Outfit inspired by Selma Hayek in the 1996 Quentin Tarantino Film, From Dusk Til Dawn. This Vampire Costume is one of many Vampire Ball or Halloween Party Costume Ideas that we keep in stock. We also have Vampire Costumes for True Blood, Penny Dreadful, American Horror Story, Blood Ties, Old Dracula Movies, Bram Stokers, Dark Shadows, Blade Movie Vampires and even the Old Classic Movie Vampires, Create Vampire Outfits that are more Traditional, Mutant, Legendary, Goth, Victorian or Modern.  When it comes to Vampires, we can hook you up. Get complete outfits or just the Vampire Character Wigs, Makeup, Time Period or Goth Attire and all the Vampire Costume Accessories you need. We are open all year to serve the Dallas, DFW & North Texas Area in our Costume Megastore that is worth your time and effort to visit.

We can help you create any Dracula Costume or Vampire Costume from any Vampire Movie or TV Show. This Gary Oldman Victorian Gothic Dracula Character Costume from Bram Stoker’s Novel turned Movie is only one example. What is your favorite Vampire  Character? This particular Dracula is a popular Goth, Fright Fest, Super Villain, Cosplay, Comic Con or Halloween Party Vampire Costume. We have Period Attire for any Vampire Outfit you have ever heard of. You will find the Vampire Makeup, Wigs & Accessories you need. Everything you could possibly need is here for you, all in one Costume Shop and we are open all year round. Get complete Vampire Costumes or just the right Time Period Clothing or Accessories you need. There are Famous & Popular Vampire Character Costumes for Ladies or Men. Our Costume Shop has the Largest Vampire Costume Selection in Dallas, DFW and North Texas. 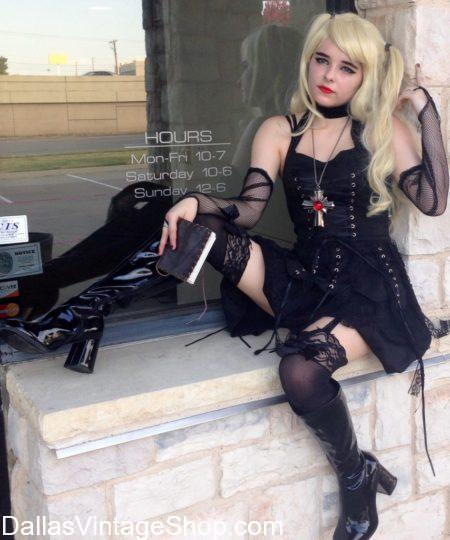 Vampire Costumes: “Dark Prince: True Story of Dracula” Costume, You can get Killer Vampire Costumes & Great Vampire Costume Ideas here. Just look at this “Dark Prince: True Story of Dracula” Costume. If you prefer Gothic Vampires, Victorian Era Vampires Medieval or Fantasy Vampires, we have what you need. You will be able to get any Vampire Movie Character Costumes. Any TV Show Vampires, Vampire & Dracula Characters from Any Century or Any Decade. Our Vampires may be Supreme Quality, Moderately Prices or Economy Vampire Outfits, We also have plenty of choices when it comes to Vampire Makeup, Wigs & Accessories for Men & Ladies. We’re Open all Year. 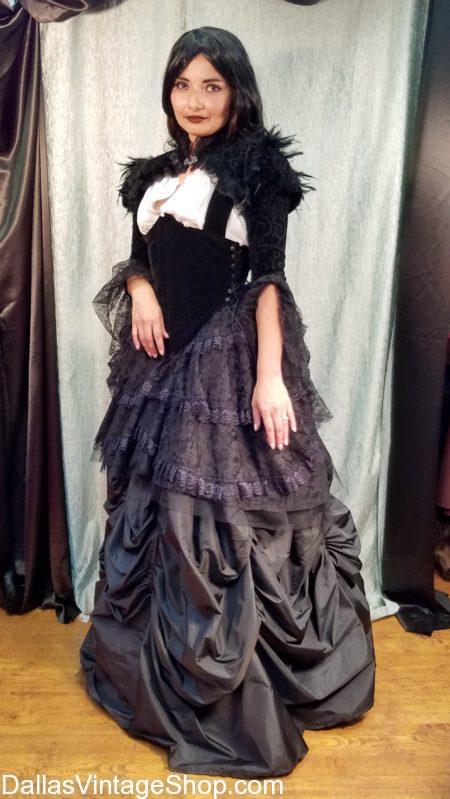 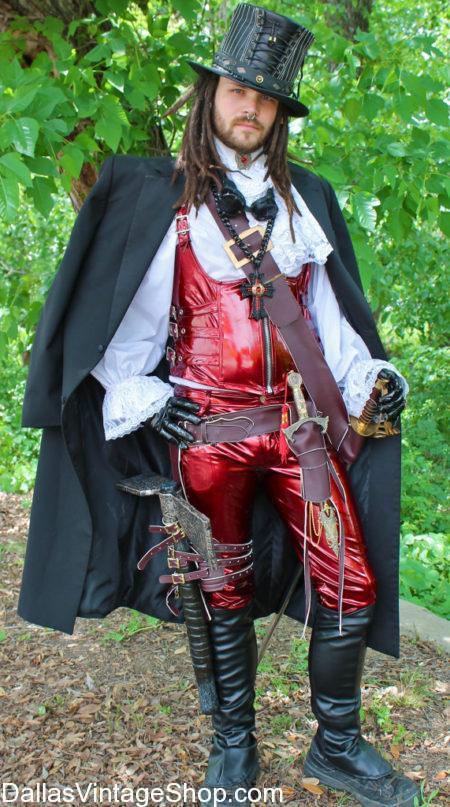 We have EXTRAORDINARY VAMPIRE & VAMPIRE SLAYER OUTFITS, Come see our unlimited Vampire Character Costume Ideas that are always in Stock, This Abe Lincoln Vampire Slayer Outfit, with a Steampunk Twist, is just one example of our Supreme Quality Vampire Attire, You can get Goth, Victorian & Historical Vampires and Movie Characters, Sexy & Fantasy Vampires too. Are you ready for Halloween or the next Cosplay Costume Convention? We have complete outfits or just the pieces you need. You will find Supreme Quality of Economy Costumes & Accessories and we are open all year. We are the largest Vintage Clothing & Costume Clothing Shop in the Dallas, DFW & North Texas Area. Call if you have any questions. 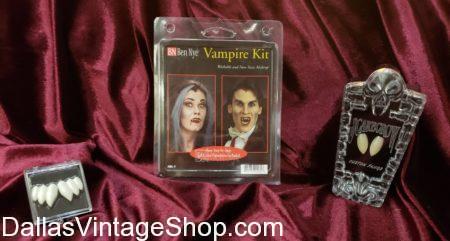 We have VAMPIRE COSTUMES & all the Vampire ACCESSORIES you could possibly need. Get Vampire Costume Fangs & Makeup, Ben Nye Vampire Makeup, Graftobian Mkleup, Mehron Makeup, Vampire Fang Kits, Classic Vampire Makeup, Vampire Blood, Gorey Prosthetics & Makeup, Men’s Vampire Wigs, Ladies Vampire Wigs, Canes for Vampires and anything Vampire you can think of. Get Complete Vampire Costumes or just the pieces you need. We’ll help you create Medieval, Victorian, Goth or other Period Vampire Outfits. Need Fantasy & Sexy Vampires or Famous Movie Character Vampires Costumes? We will hook you up. We offer Supreme or Economy prices and we are Open all Year.

Posted in Vampires | Comments Off on Vampire Costume Fangs & Makeup