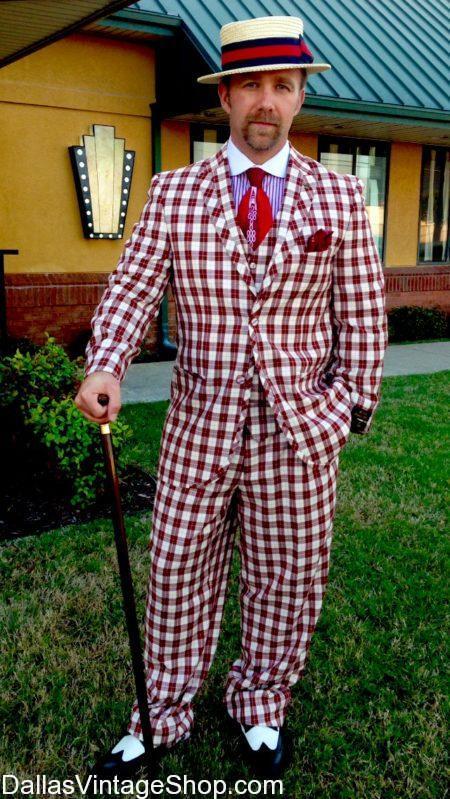 Here is one Dapper 1920’s Jazz Age Gentleman in his 1920’s Checker Board Suit, Skimmer Hat, Art Deco Tie & Pocket Square wearing Jazzy Wing Tip Spat Shoes and holding a Vintage Style Walking Cane. This 1920’s Summer Jazz Festival Costume is quick and easy to assemble, on the spot at Dallas Vintage Shop because we have more 20’s Era Clothing, Costumes and Accessories than any Men’s Store or Costume Shop in the Metroplex or Anywhere. Get Superior 20’s Complete Outfits or just the Economy or Median Priced 1920’s Costumes or just the Accessories you need. 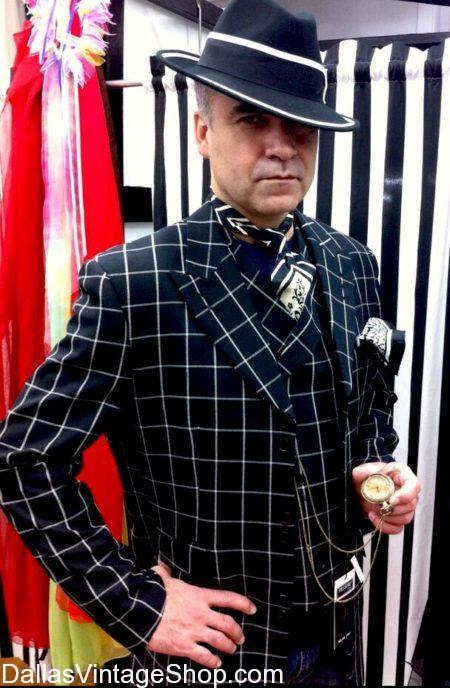 Who is your favorite 20’s Handsome Dangerous Gangster? We have the 1920’s Men’s High Quality Suits and Complete Outfits for your all the 1920’s Movie Characters. This Supreme Quality 3 Pc. Dramatic Black with Bright White Window Pain Pattern Suit is a Real Killer. We have many more equally studly Gangster Suits in the colors and styles like the 1920’s. Our 20’s Gentlemen’s Hats are Plentiful and Diverse. There are Homburgs, Fedoras, Skimmers, Panamas, Zoots, Godfathers and every 20’s Men’s Quality Period Hat you could possibly need. We have all Sizes and Colors to match your Suit. Get the Art Deco, Art Nouveau or other Gangster Dramatic Ties or Simple White or Black & White ties too. We have the Pocket Squares to match. Men’s 20’s Shoes come in every color imaginable, two-tones, Wingtips, Sporty, Showy and in all sizes up to 14 or 15 in most. There are also important essential Men’s 20’s Accessories like Pocket Watches, Cuff Links, Period Eye Glasses & Gangster Rings, Broaches and other Jewelry. Get Complete Supreme Quality 1920’s Outfits, Formal & Gala Attire or Economy and Median Priced Theatrical or Theme Party Costumes. Dress like a Mob Boss, Prohibition Era King Pen, Bootlegger Dirty Cop. Don’t forget about the Speakeasy Jazz Artists, Hollywood Stars Corrupt Politicians and Wealthy Socialites from Movies like Cotton Club or Harlem Knights. The sky is the limit because we have more 20’s Men’s Attire, Costumes & Quality Period Accessories than anyone in the Dallas, DFW or North Texas Area. We are open all year to serve you. 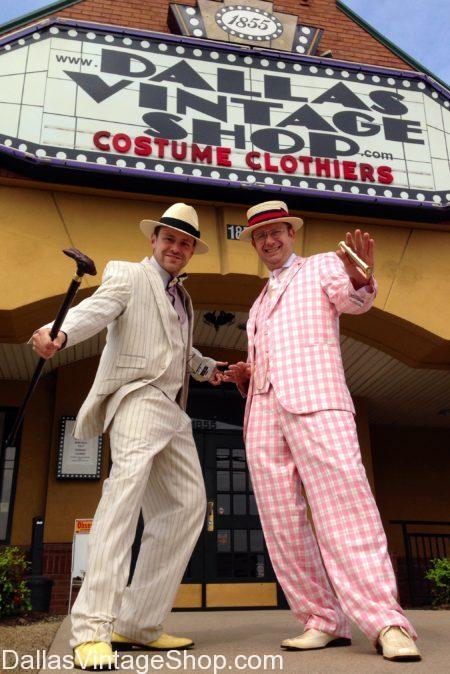 Get ready for the Roaring 20’s in this 1920’s Speakeasy Gentleman’s Fine Suit. This Handsome 1920’s Black & Red Pinstripe Suit is just a sample of the Fantastic 20’s Men’s Suits we keep in stock all year round. When you need Prohibition Era, Speakeasy Gentleman’s Complete Outfits there is no better place in Dallas, DFW or North Texas to find everything you need. Find 20’s Gangsters, Bootleggers, Movie Stars, Jazz Age Artists, King Pins or Rich Industrialists or Mob Bosses Costumes that will astound you. We have every 20’s Accessory for Any Outfit for Any 20’s Genre or Any Class of Person. We have it all in our One Stop Shop and we keep it in stock, all year round for your convenience. From Celeb Status Outfits for Gala Balls to Theatrical Costumes and Theme Parties, we have what you need. Get Supreme Quality or Median & Economy Priced Clothing, Costumes and Accessories.

How do you like this 1920’s Jazz Era Band Leader High quality Outfit. We have more 20’s Period Historical Costumes for Theatrical & Concert use than anybody in the Dallas, North Texas Area. Find Excellent1920’s Band Costumes, Movie Stars Outfits for 20’s Movies & Jazz Era Movie Characters like The Cotton Club are here. 20’s Attire for any Class or Classless Person in the Roaring 20’s is here to be found. Get Complete Outfits, Wardrobes or just the Costume pieces and Accessories you need. From Superior Quality 1920’s Attire to Median & Economy Priced Costumes, we have what you need.

Guys and Dolls, the 1950 Musical Hit was inspired by the gangsters and lifestyles of the 1920s and 30s Period. This amazing pin striped Gangster Suit is perfect for a Sky Masterson Costume. We have so much 1920s Theatrical Attire, 20s Fashions, Hats, Ties, Shoes and more that also makes killer Theme Party Costumes.

Get all the 1920’s Men’s Attire you need for 1920’s Theme Party Costumes, Charity Fundraiser Gala 1920’s Themed Events, 1920’s Theatrical or Film Productions or for 1920’s Historical Characters Reenactments, We have everything you need for the 1920’s, like this 1920s Lord Gillingham Downton Abbey Character Costume. We have the 1920’s Period Hats, Ties, Vests, Suspenders & Shoes you need. Get Supreme Quality Attire or just the Costume Pieces & Accessories you need. 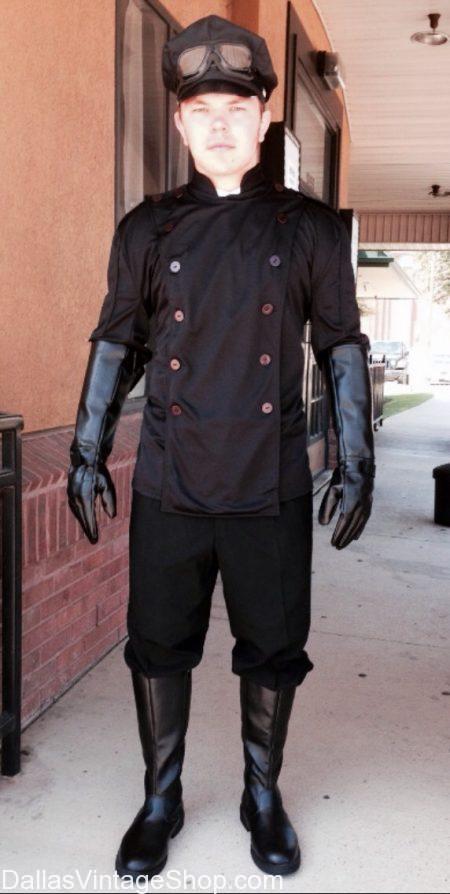 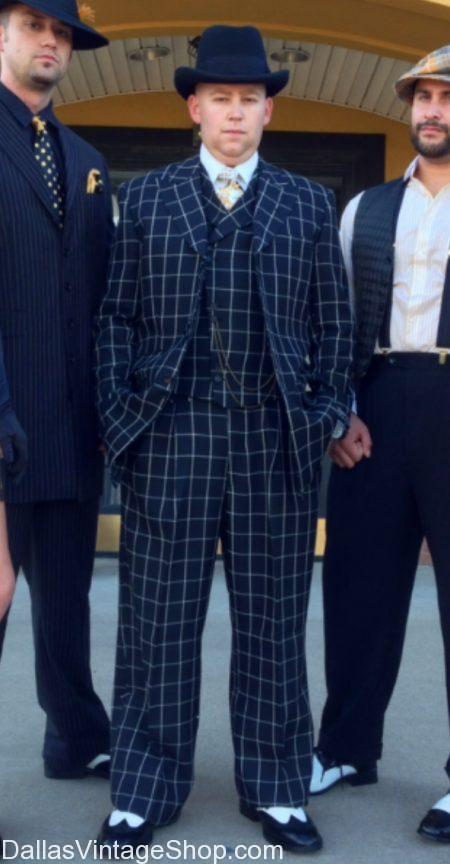 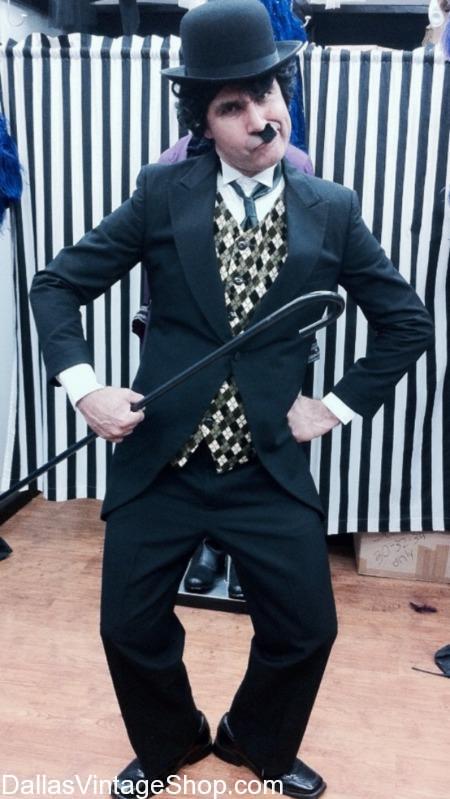 Looking for 1920’s Famous Actors Costumes? We have 20’s Outfits for any Actor or Comedian you can think of. This Classic Charlie Chaplin Costume as seen in ‘The Tramp’ established his iconic Chaplin persona in 1915. His career soared in the 1920’a. Sir Charles Spencer Chaplin was a British comedian, producer, writer, director, and composer. Another Classic Chaplin production is the 1931 film ‘City Lights. This Charlie Chaplin Hat, Cain & Suit for the 1910s, 1920s & 1930s is only one of many great costume ideas. Dallas Vintage Shop provided this and other great 1920’s Outfits. From Historical 1920s Characters to Movies about the 1920s, we have what you need. Get Supreme Quality or Economy Costumes for Theatrical Productions or Hollywood Theme Parties. Why don’t you host a Hollywood Stars Theme Party?