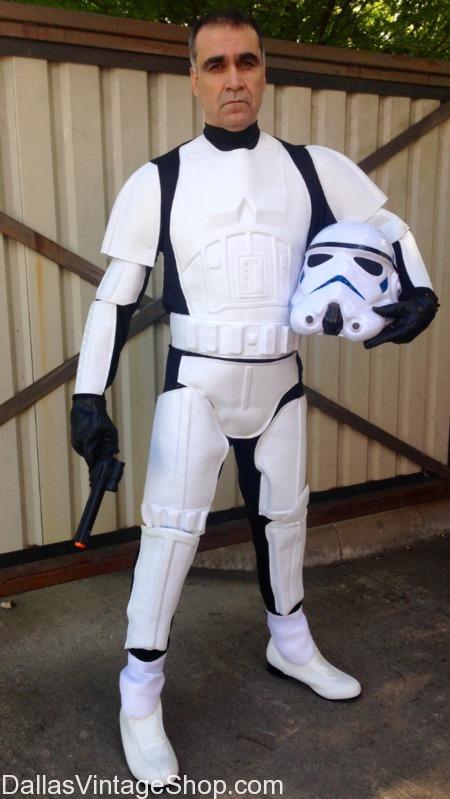 We have Star Wars Costumes Galore at http://dallasvintageshop.com/! This Star Wars imperial Soldier iis your average, stereotypical Stormtrooper in White Costume. Stormtroopers are a branch of the Galactic Empire’s military. The stormtroopers, the Empire’s elite shock troops were organized under the Stormtrooper Corps, which operated as part of the army. When it comes to Star Wars Characters Costumes the One Stop Shop for the Dallas, DFW or North Texas Area.

Find Star Wars Stormtrooper Costumes & many other Star Wars Characters, Villains and of course all the Iconic Action Heroes Outfits at Dallas Vintage Shop. This Ground Forces Shock Troop Soldier is your average, stereotypical Stormtrooper in White Costume. We have many other Star War Characters Costumes for Ladies, Men, Girls & Boys in a variety of price points. We are the Dallas, DFW & North Texas Costume Super Store. Get all your Star Wars Movies Characters Outfits or any other Blockbuster Sci-fi Movie Characters Costumes & Accessories here. If you need Cosplay Costumes, Action Characters, Hollywood Greats, TV or Movie Characters or Halloween Costumes for Theme Parties, there is no better place in Dallas or the DFW Metroplex to find complete outfits or just the Ladies Wigs, Men’s Wigs, Makeup and Accessories you need.

This entry is filed under Star Wars. You can follow any responses to this entry through the RSS 2.0 feed. Both comments and pings are currently closed.