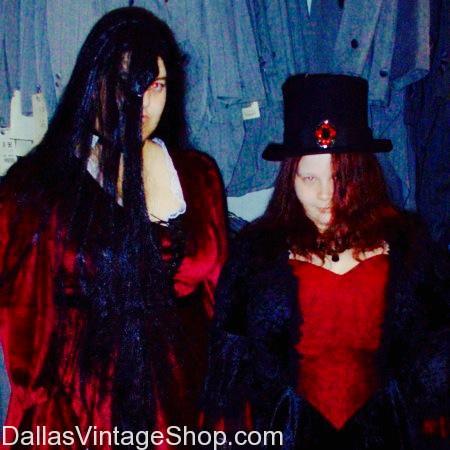 We have Goth in the 90’s Outfits for 90’s Theme Parties and Alternative 90’s Attire. These 90’s Goth Chicks had their own brand of 90’s Goth. We also have Glamorous Victorian Goth, Sexy Rock & Roll Goth and other 90’s Goth Costume Ideas.

90’s Costume Ideas are unlimited at Dallas Vintage Shop because we are the Encyclopedia of Costumes, and that includes the 90’s. We also have 90’s Pop Musicians & Bands. What was your favorite 90’s Band or Musician? You will find a costume for any one of them. 90’s Grunge Outfits are also great 90’s Costume ideas & 90’s Theme Parties. Nobody has more popular 90’s Movie & TV Show Characters Costumes. There are also 90’s Rock Star Outfits. Find great 90’s Clothing & Fashions for Theme Parties or 90’s Hairdo Wigs and Trendy Accessories form the 90’s

There are 100’s of OTHER COSTUME CATEGORIES for you to Browse in the RIGHT HAND COLUMN.

This entry is filed under 1990s, Alternative Fashions, Goth. You can follow any responses to this entry through the RSS 2.0 feed. Both comments and pings are currently closed.