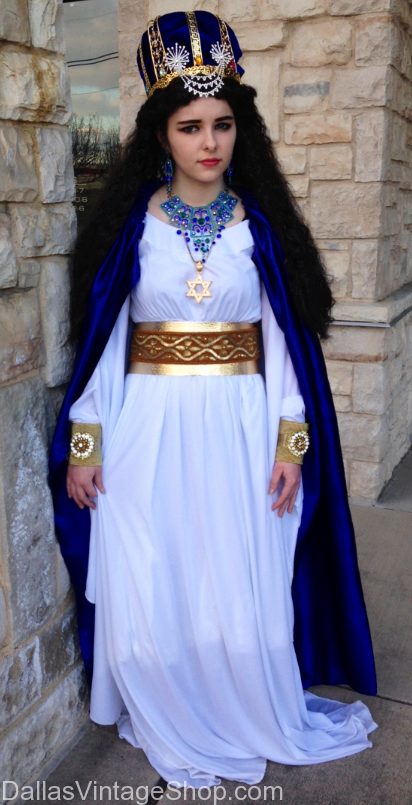 You will find Ancient Historical Costumes like Ancient Greek, Roman, Hebrew, Persian, Greek & Biblical Costumes and all the Period Accessories you need to create Theatrical, Historical Reenactment, Film, TV Commercials & School Projects  We also have excellent Religious Holiday & International Festival Outfits. Get Ancient Historical Characters or Hollywood Movie Versions of Ancient Characters Costumes in Supreme Quality Prices or Median & Economy Priced Costumes.
We even have Amazing Costumes for Ancient People Groups, Cavemen, Ancient Tribal Attire for Theme Parties or for Ancient Mythology Gods & Goddesses. From Rulers & Warriors to Peasant and Merchant Class, we will have all of the Outfits for Ancient Greek, Ancient Roman, Ancient Egyptian, Ancient Hebrew, Ancient Persian & Ancient Bible Characters in Adult, Children & Plus Sizes.
Pageant Costumes like this Ancient Queen Esther Better Quality Outfit, pictured above one version of the Ancient Hebrew Heroine Outfit that is popular during Purim. We have Villains & Heroes from all Ancient Nations & Tribal Peoples from Cavemen to Ancient High Priests, Legends & Storybook Characters as well as Historical Folkloric Costumes. We keep Ancient Historical Attire in stock all year round.

This entry is filed under ANCIENT PERIODS. You can follow any responses to this entry through the RSS 2.0 feed. Both comments and pings are currently closed.